Canine village is an accredited kennel Established in 1984. Though the beginning was humble, under the able guidance of founder/master trainer, Mr. Suresh Sherawat, it is the one and only institution of its kind in the Indian sub-continent Initially the thrust was to ensure quality training aids and also to upgrade the existing standard of breeding in collaboration with THE JACKSON GUARD DOG TRAINING COMPLEX AUSTRALIA & SOON KWAN DOG TRAININGCENTRE, SINGAPORE.

We had alliance with the Swedish consumer giant company ELECTROLUX and had established a number of dog Squads in the Middle East, which includes the Royal families, Military and Police Establishments, Private Sector and leading industrial houses. Mr. Suresh is a recognized figure and has participated as a judge/evaluator in most canine festivals which take place in India and abroad. 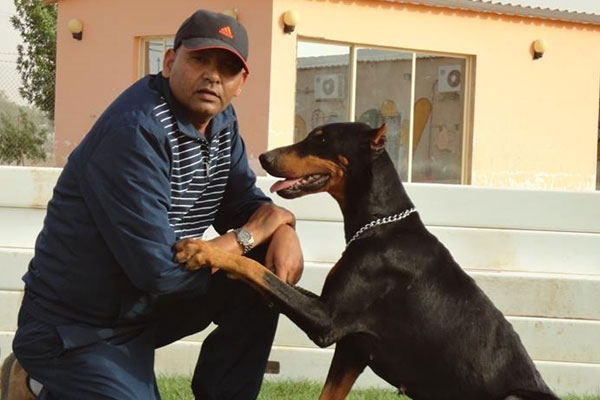 In our endeavor to forge better standards the master trainer has participated in several international dog shows and has been invited to attend/participate in many advanced training workshop/seminars.

Mr. Suresh is a pioneer in propagating group training and also offers after sale services to the handlers/owners. This has revolutionized the entire concept of breeding and training in the Indian canine history. By virtue of our commitment, many prestigious Government and leading industrial organizations have chosen us as their security consultants.

Canine village dog training and research centre is spread over 4 acres camous and boasts of an excellent training faculty and a top of the line research centre to improve the breeding standard of working/police dogs.

SURESH SHERAWAT
The motivating force behind the Organization

Mr. Suresh has spent years researching the different aspects of dog training and perfecting professional, humane methods of dog training for homes, Military, Police, Industrial Houses and other Govt./Security Agencies. In order to achieve more expertise he went to Singapore and worked with many leading dog training Institutions and is associated with the Soon Kwan Kennels Dog Training Centre and got honored for the work with its chief instructor Sunny Lin Yi Shun. It was here that he was advised to go to Australia because of the Superb training facilities and expertise. Taking his Singaporean associate’s advice Suresh went to Australia to study the latest technique of dog training being used overseas. He further collaborated with one of the leading K-9 Institute – THE JACKSON GUARD DOG TRAINING COMPLEX based in QUEENISLAND and spent more than six months to redefine and achieve the highest level of Police Dog Training called Schutzhund German Police Training which included subjects such as Obedience Preparation for Competition, Personal Protection, Obstacle course Training Techniques, Night Patrolling, How to organize Dog Obedience classes, Practical Application and Experience working with Dogs and Clients.

In March 1986 he was awarded with the Best Trainer’s Award at Northern Indian National Kennel Club Dog Show held at New Delhi. He has also won the Best handler’s and Best Breeder for the year 1986.

Mr. Suresh was the first to introduce the Pioneering concept of “Overseas Non-Force Method” in India.